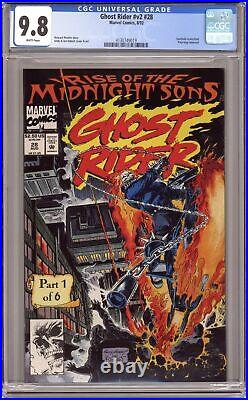 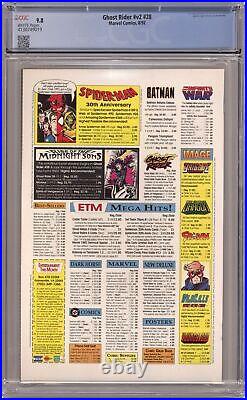 Comic Book Value Packs. Key Comics & First Appearances. Good Girl Art Comics. Ghost Rider #28P Kubert Variant Polybagged With Poster CGC 9.8 1992 4130749019. While we make every effort to note any significant damage to slabs, any CGC case may display minor imperfections including Newton rings, slight inner well scuffing (present at time of encapsulation), or standard surface wear (minor scratches/scuffing). If minor imperfections in the case are a concern to you, please look very closely at the item image before ordering. Rise of the Midnight Sons: Part 1 of 6 – Visions! Written by Howard Mackie. Art by Andy Kubert and Joe Kubert. Ghost Rider captures two criminals who murdered an elderly woman and deposits them in the mausoleum where he has kept Blackout, Stern, and dozens of other criminals captive. At the Ketch house, Stacy and Gerard Dolan console Francis Ketch over Dan’s disappearance. Dolan then gets a call that the police are about to arrest Ghost Rider and leaves to assist. At the cemetery, a man calling himself the Caretaker greets Johnny Blaze and Ghost Rider and tells them the police have surrounded the cemetery. Ghost Rider opens the mausoleum to find all of his captives dead, and, within the void, Dan’s spirit experiences a vision given to him by Lilith of an assemblage of supernatural heroes. Blackout and Stern emerge from the crypt and Blackout bites Ghost Rider, causing to experience Lilith’s vision as well. Blackout realizes Lilith is his mother and vows to find her. Blackout and Stern flee the mausoleum amidst police gunfire. Michael Badilino, the officer in charge, enters the mausoleum to arrest Ghost Rider, but Caretaker hits him with a shovel and leads Ghost Rider and Blaze through underground tunnels to an unoccupied section of the cemetery. Blackout attempts to flee on a bike Blaze stored in the cemetery, but flees on foot when Blaze sets the bike ablaze hellfire. Blaze, on the flaming bike, and Ghost Rider leave to meet with the Quentin Carnival in Rhode Island, and Caretaker asks the arriving Doctor Strange if he believes he can defeat Lilith. Story continues in Ghost Rider/Blaze: Spirits of Vengeance (1992) #1. This item is a consignment. This item is a consignment, which means that the price has been set by the consignor rather than by MyComicShop. The item images for this listing are not stock images, they show the exact item offered. We take pride in our accurate, consistent grading. You can be confident in receiving a well-graded comic when ordering from us. We understand that condition is important to collectors. Orders are processed each weekday morning, so be sure to submit all orders quickly if you want us to combine them. This item is in the category “Collectibles\Comic Books & Memorabilia\Comics\Comics & Graphic Novels”. The seller is “mycomicshop” and is located in this country: US. This item can be shipped worldwide.