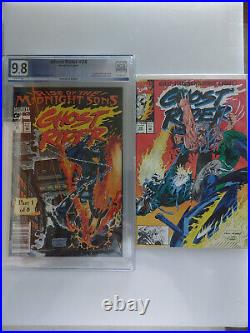 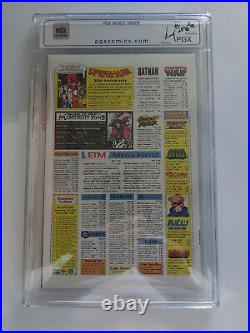 GHOST RIDER #28 PGX 9.8 NEWSSTAND 1ST APP MIDNIGHT SONS w/POSTER/BAG and #29 NM+. This is a new slab from PGX West with no issues. The 28 book has two tiny spine creases on the front cover. I graded the book as a solid 9.7. I have been collecting since 1992 and know how to grade books. The 28 book is the Rise of the Midnight Sons: Part 1 of 6 – Visions! Written by Howard Mackie. Art by Andy Kubert and Joe Kubert. Ghost Rider captures two criminals who murdered an elderly woman and deposits them in the mausoleum where he has kept Blackout, Stern, and dozens of other criminals captive. At the Ketch house, Stacy and Gerard Dolan console Francis Ketch over Dan’s disappearance. Dolan then gets a call that the police are about to arrest Ghost Rider and leaves to assist. At the cemetery, a man calling himself the Caretaker greets Johnny Blaze and Ghost Rider and tells them the police have surrounded the cemetery. Ghost Rider opens the mausoleum to find all of his captives dead, and, within the void, Dan’s spirit experiences a vision given to him by Lilith of an assemblage of supernatural heroes. Blackout and Stern emerge from the crypt and Blackout bites Ghost Rider, causing to experience Lilith’s vision as well. Blackout realizes Lilith is his mother and vows to find her. Blackout and Stern flee the mausoleum amidst police gunfire. Michael Badilino, the officer in charge, enters the mausoleum to arrest Ghost Rider, but Caretaker hits him with a shovel and leads Ghost Rider and Blaze through underground tunnels to an unoccupied section of the cemetery. Blackout attempts to flee on a bike Blaze stored in the cemetery, but flees on foot when Blaze sets the bike ablaze hellfire. Blaze, on the flaming bike, and Ghost Rider leave to meet with the Quentin Carnival in Rhode Island, and Caretaker asks the arriving Doctor Strange if he believes he can defeat Lilith. Story continues in Ghost Rider/Blaze: Spirits of Vengeance (1992) #1. The 29 book is Biting the Hand that Feeds You! Guest-starring Wolverine and Beast. A trio of hoodlums attempts to rob Ghost Rider and Johnny Blaze, but is easily subdued. The Beast and Wolverine, the latter following Ghost Rider after noticing his sent was different, give careful chase as Ghost Rider carries the muggers off. Nearby, mercenary Agent-X fails to negotiate a higher profile percentage and level of control with his employer, Frederick Penner. Ghost Rider drops the muggers off with the police and, as he ponders recent events, Dan Ketch’s spirits continues his journey through the void. Ghost Rider spots the mercenaries’ attack on the Penner estate and, when Turk kills Penner’s neighbor for calling for help, Ghost Rider intervenes, but is ensnared in Snares omnium net. Wolverine and the Beast arrive, free Ghost Rider, and join his battle against the mercenaries. Next Wave initially overwhelm the X-Men and blow Ghost Rider apart, but he regenerates, defeats them, and gives them all the penance stare. Wolverine cautions Ghost Rider that his link to Dan is slipping, and Ghost Rider leaves. Wolverine and the Beast also leave, ignoring Penner’s offer of employment. This item is in the category “Collectibles\Comic Books & Memorabilia\Comics\Comics & Graphic Novels”. The seller is “bandbsdad” and is located in this country: US. This item can be shipped to United States.