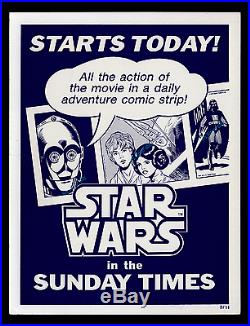 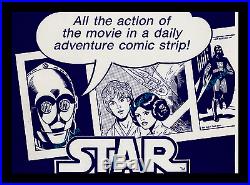 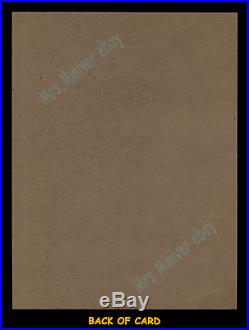 MUST HAVE STAR WARS! RUSS MANNING COMIC STRIP ART! 1979 ORIGINAL ADVERTISING POSTER! Here’s one of the most interesting and charming Star Wars advertising pieces released in the 1970s. An Original Poster [or Kiosk card] made to advertise the Star Wars 1979 Newspaper Comic Strip. Serialization by Russ Manning. Star Wars was a worldwide sensation back in 1979. Globally, the film had been playing for more than a year straight in the cinemas. Lucas, being a comic art aficionado, decided to hire artist Russ Manning to render strips serializing the. Of the film in a seven-part series. It was a good move because this became one of the most successful campaigns on “Star Wars” outside of the film. Some of the newspapers premiering the strip printed newsstand advertising posters announcing it’s coming to drum up sales and subscriptions. This LA Sunday Times iteration is simply THE nicest and most charming, as it is one of the only posters made that actually shows the Russ Manning strip art. It also carries the all important Black Falcon Ltd. This poster is one of the rarest 1970’s Star Wars posters. In my over 40 years of avidly collecting Star Wars posters, I’ve only seen THREE (3) of these originals! This being one of them. This Star Wars poster is rarer than the 1970’s movie poster one-sheets on the film by a factor of at LEAST 10,000 to 1, that’s a fact. This is a kiosk card that measures 14 inches by 10 and 5/8th inches. This poster is in VERY FINE + to. I had a TOP conservator address the area with TOP results. So you can see just how terrific this baby truly is! This is one of the nicest Star Wars advertising displays ever made! If you’re looking for an investment/museum quality item. “Star Wars: The Last Jedi, ” starring Mark Hamill – in what hopes to be the performance of his lifetime – is due out for release this December. The film is already causing quite the buzz around Hollywood. Talk of an Oscar nomination is already in the air for the veteran actor as he reprises his signature role in this new large scale 21st century big-screen production. If that’s not enough, additionally, Disney is constructing the TWO (2) world record largest theme parks ever built, and both are going to be 100% dedicated to Star Wars! When that happens, this poster will inevitably be a HOT PROPERTY. Let’s face it, it’s red hot now, but it will undoubtedly become a white. Hot mamma when we round that bend. So pick it up now while it’s still obtainable. Original Music Mark Hamill…. Luke Skywalker Harrison Ford…. Han Solo Carrie Fisher…. Princess Leia Organa Peter Cushing…. Grand Moff Tarkin Alec Guinness…. Ben Obi-Wan Kenobi Anthony Daniels…. Darth Vader James Earl Jones…. It can crash regardless of any decision you make and can even crash regardless of any decision made by the company related to the stock – Leaving you with a near worthless piece of paper that won’t inspire anyone! The magnificence of art and historic documents have an inherent value that relates to civilization and society. This poster is definitely. FOR MOST ITEMS LISTED. Please write with any questions. If you’re in the market for top quality original vintage movie posters or Star Wars, then please. The item “Star Wars SUNDAY TIMES COMIC STRIP MOVIE POSTER 1979 ADVERTISING DISPLAY CARD” is in sale since Friday, December 29, 2017. This item is in the category “Collectibles\Comics\Original Comic Art\Comic Strip Art”. The seller is “mrs.miniver” and is located in Studio City, California. This item can be shipped worldwide.